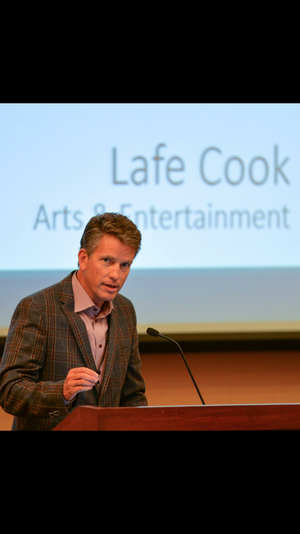 KINGSPORT, Tenn. – Lafe Cook, Dobyns-Bennett High School Band Director, has been elected president-elect of the Tennessee Music Education Association (TMEA) Board. Cook was elected by a membership of 1,700 music teachers from across the state and will transition into the office of president-elect on June 8, 2016. He will serve a two-year term as president-elect, followed by two years as president from 2018-2020.

“Programs like the Dobyns-Bennett Band don't experience significant and long-term success without passionate and successful leaders who never stop learning,” said Dobyns-Bennett Principal Dr. Chris Hampton. “This leadership opportunity speaks to Mr. Cook's willingness to learn through an active network of music educators and professionals across the state and country.  I have no doubt that he will lead TMEA with the same vigor he demonstrates as he leads the Dobyns-Bennett Band.  Accordingly, I expect that organization will thrive under his leadership.”

Cook has been a high school band director for twenty-five years and is in his nineteenth year as the Director of the Dobyns-Bennett Band Program.  He is a graduate of the University of Tennessee, Knoxville where he was drum major of the Pride of the Southland Marching Band and a graduate assistant with the music department. His teaching responsibilities at Dobyns-Bennett include directing the Symphonic Band, the Marching Band, and administering the 350 member band program. In addition, he is the Supervisor of Secondary Bands for Kingsport City Schools.  He also has served two terms on the board of directors for the Kingsport Ballet and currently serves the City of Kingsport as a liaison with city government regarding improvements in Kingsport’s arts and entertainment infrastructure and atmosphere.

The Dobyns-Bennett Symphonic Band has performed at numerous conventions, including the College Band Directors National Association and National Band Association Southern Regional Convention in 2002, the Tennessee Music Education Association Conference in 2000, 2004, 2008, 2012 and 2016, the Bands of America’s National Concert Band Festival in 2006, and the Midwest International Band and Orchestra Clinic in 2002 and 2009.  The Dobyns-Bennett Symphonic Band was the recipient of the John Philip Sousa Foundation’s 2005 Sudler Flag of Honor, recognizing international excellence in concert band and the 2015 Sudler Shield for international excellence in marching band. Dobyns-Bennett is one of only fourteen schools nationally to achieve both awards. Most recently, the band received an invitation to perform at the 2017 American Bandmaster’s Association alongside three collegiate bands and the “President’s Own” United States Marine Band.

Under his direction, the Dobyns-Bennett Marching Band has appeared in three Tournament of Roses Parades, two Macy’s Thanksgiving Day Parades, The Lord Mayor of London’s Parade, the Fiesta Bowl Parade, the Presidential Inaugural Parade and has been a Band’s of America Grand Nationals Semifinalist five times.  In 2006, 2007 and 2013 the Dobyns-Bennett Band was honored to receive the Tennessee Governor’s Cup at the Middle Tennessee State University’s Contest of Champions and in 2011, Dobyns-Bennett Band was invited by the University of Tennessee to perform at halftime during a Tennessee home game, the first high school band to do so in 50 years.

The Tennessee Music Educators Association (TMEA) was officially formed in 1945 as a voluntary, non-profit organization representing all phases of music education at all school levels. The mission of TMEA is to promote the advancement of high quality music education for all. For more information about TMEA, visit tnmea.org.